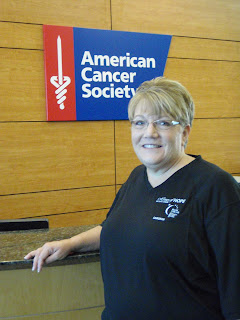 I’m Regina Lawry, from Mena, Arkansas.  I’m a caregiver and I’m 1 out of 7.
I’m the only one in my immediate family that has never had a cancer diagnosis.
When I was a little girl in the early 60’s I went out collecting money for ACS with my mother.  At that time the ACS would send out envelopes and ask people to take them around their neighborhoods.  I can remember asking her why we were doing it and she would tell me, “You never know who it might help.”
In 1975 she was diagnosed with leukemia.  In the 70’s leukemia was a death sentence.  There was no treatment.
She would get so weak.  I remember her coming to my house one day and she was too weak to even open the screen door.  It was as if mom’s blood would just disappear.
At that time the only thing they could do for her was to give her platelets or whole blood.  They were giving her several units of whole blood and or platelet every week.
It was the ACS that developed apheresis (the technology to separate the platelets from the whole blood).  This technology is used in many other medical applications also.
At that time the family was responsible for replacing the blood that was used for her.  We all donated and were always scrambling to find other donors.  The Local ACS office donated over 100 units in her name.  I’m not saying that this is a service that is provided by ACS.  It’s just how much they care.
The doctors decided to remove her spleen and hopefully stop the loss of blood.  While she was in the hospital they asked her to participate in a bone marrow study.  They were studying the progression of the disease.  She was told that it would not benefit her, but would hopefully help others later on.
They told her that it was painful.  It was done with a local and they had to drill into the hip bone and remove the marrow.  We tried to talk her out of it, but she insisted that she would do it.  She said, “You never know who this might help.”
In December of 1976 she lost her battle with cancer.
In the summer of 1996 (20 years later) a bone marrow transplant saved my sister Lenora’s life.  In February of that year she was diagnosed with stage 3 breast cancer.
I took care of her 6 weeks during her transplant.  It was the hardest thing I have ever done.  As a caregiver you are completely exhausted all of the time and you are watching some you love go through something so difficult. My brother Duane was her stem cell donor.
ACS is still funding platelet and stem cell research.  The ACS does NOT fund embryonic stem cell research.  I repeat the ACS does NOT fund embryonic stem cell research.  That was important to me.
A few years later my sister Roberta was diagnosed with bi-lateral breast cancer and underwent a double mastectomy along with chemotherapy.  She is still cancer free.
Not long afterwards my sister Bunny was diagnosed with breast cancer and chose to have a double mastectomy.  It was caught early and no further treatments were required.
After Roberta’s treatments and recovery she became involved in Relay for Life in Enumclaw, Washington.  She invited all of us to come to Enumclaw and support her in the Relay.  We all went, because that’s the kind of family we are and we wanted to help her through her healing process.
I cannot tell you what it meant to me when I watched my siblings walk arm and arm around that track in the survivor lap.  Then when I saw my mother and my father’s luminary bags during the luminary ceremony I knew it was something that I had to be a part of.
I returned to Enumclaw for a few years for Relay.  Then one day I got a luminary form in my bank statement.  They were having a Relay in Polk County.  I called the number on the form, signed up a team, raised $7000 and have been the chairman of the Polk County Relay for 5 years.
Not too long ago on Facebook I saw that my cousin Michael was diagnosed with leukemia and was getting ready to undergo a bone marrow transplant.  I called him and we talked about my mother and what she had done.  We cried and we laughed.  36 years later bone marrow and stem cell research is still saving lives.
The money that is raised helps long term.  We may not see the results today but ACS researchers save thousands and thousands of lives.  I know, because I’ve seen it first hand through things like Blood apheresis, bone marrow studies, stem cell research and various drugs and chemotherapies.
So why do I Relay?  It’s my legacy.  I want my grand-children to know what my mother did for love.  She would have endured it all for a stranger, but ended up doing it for those she loved.  I want there to be treatments if they ever need them.
I’m Regina Lawry and I Relay BIG in Polk County, Arkansas. 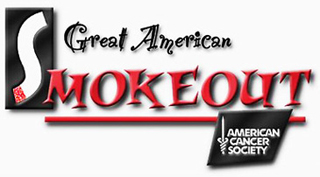 Every year, on the third Thursday of November, smokers across the nation take part in the American Cancer Society Great American Smokeout. They may use the date to make a plan to quit, or plan in advance and then quit smoking that day. The event challenges people to stop using tobacco and helps people know about the many tools they can use to quit and stay quit.

In many towns and communities, local volunteers support quitters, publicize this anti-smoking event, and press for laws that control tobacco use and discourage teens from starting.

Research shows that smokers are most successful in kicking the habit when they have support, such as:
Telephone smoking-cessation hotlines
Stop-smoking groups
Online quit groups
Counseling
Nicotine replacement products
Prescription medicine to lessen cravings
Guide books
Encouragement and support from friends and family members


Using 2 or more of these measures to help you quit smoking works better than using any one of them alone. For example, some people use a prescription medicine along with nicotine replacement. Other people may use as many as 3 or 4 of the methods listed above.

Telephone stop-smoking hotlines are an easy-to-use resource, and they are available in all 50 states. Call us at 1-800-227-2345 to find telephone counseling or other support in your area.

Support is out there, but the most recent information suggests that fewer than 1 in 3 smokers reports having tried any of the recommended therapies during their last quit attempt.