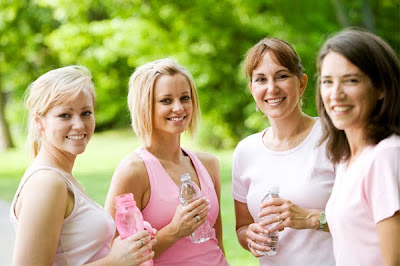 Postmenopausal women at a high risk of developing breast cancer may want to talk to their doctors about the drugs raloxifene (Evista) and tamoxifen (Nolvadex), according to new data from the STAR (Study of Tamoxifen and Raloxifene) trial.

One of the largest breast cancer prevention trials to date, STAR involved more than 500 cancer centers across the US, Canada, and Mexico. It began in 1999 and was extended in 2006 because initial results were unclear. These new results don’t settle the score on which drug is more effective, but suggest women discuss the pros and cons of each drug with their doctor in the context of their medical history and risk factors.

In the study, almost 20,000 postmenopausal women were given either tamoxifen or raloxifene and were carefully followed to see whether they developed invasive or non-invasive breast cancer. Researchers also looked at whether side effects differed significantly between the 2 drugs. The follow-up period was extended for a median of 81 months, compared to 47 months in the initial trial.

Side effects of tamoxifen include fatigue, hot flashes, vaginal dryness or discharge, and mood swings. More serious side effects include an increased risk of developing cancers of the uterus and blood clots.

Raloxifene was initially used to help prevent osteoporosis (bone loss). It is also associated with an increased risk of blood clots.

Researchers found that the drugs were equally effective in reducing the risk of developing invasive breast cancer (50%), but women who took raloxifene had a slightly greater risk of developing invasive breast cancer than those who took tamoxifen (24% higher risk). Women on raloxifene also had a slightly higher risk of being diagnosed with this non-invasive disease

However, when it came to side effects, the women on raloxifene had 36% fewer uterine cancers and 29% fewer blood clots than the women who were assigned to take tamoxifen.

Death rates over the time of the study were the same for both groups of women, regardless of whether they took tamoxifen or raloxifene.

Based on these findings, the study authors conclude women at high risk for breast cancer discuss the pros and cons of each drug in context of their own medical history and risk factors. Women at high risk include those with a strong family history of the disease, certain genetic mutations (such as BRCA1 or BRCA2 mutations), or with a personal history of pre-cancerous breast changes. To learn more about each of these drugs, see Medicines to Reduce Breast Cancer Risk.

There are other ways to help lower your risk of developing breast cancer – keeping your weight in check, exercising regularly, and limiting your consumption of alcohol. Cancer is the world's top "economic killer" as well as its likely leading cause of death, the American Cancer Society contends in a new report it will present at a global cancer conference in China this week.

Cancer costs more in productivity and lost life than AIDS, malaria, the flu and other diseases that spread person-to-person, the report concludes.

Chronic diseases including cancer, heart disease and diabetes account for more than 60 percent of deaths worldwide but less than 3 percent of public and private funding for global health, said Rachel Nugent of the Center for Global Development, a Washington-based policy research group.

Money shouldn't be taken away from fighting diseases that spread person-to-person, but the amount devoted to cancer is way out of whack with the impact it has, said Otis Brawley, the cancer society's chief medical officer.

Cancer's economic toll was $895 billion in 2008 — equivalent to 1.5 percent of the world's gross domestic product, the report says. That's in terms of disability and years of life lost — not the cost of treating the disease, which wasn't addressed in the report.

The World Health Organization has long predicted that cancer would overtake heart disease this year as the leading cause of death. About 7.6 million people died of cancer in 2008, and about 12.4 million new cases are diagnosed each year.

Tobacco use and obesity are fueling a rise in chronic diseases, while vaccines and better treatments have led to drops in some infectious diseases.

Many groups have been pushing for more attention to non-infectious causes of death, and the United Nations General Assembly has set a meeting on this a year from now. Some policy experts are comparing it to the global initiative that led to big increases in spending on AIDS nearly a decade ago.

"This needs to be discussed at the UN — how we are going to deal with this" rising burden of chronic disease, said Dr. Andreas Ullrich, medical officer for cancer control at WHO.

The answer is "not a fight against each other," but more cooperation on areas that overlap, such as cancers with infectious causes, such as cervical cancer and HPV, human papillomavirus, Ullrich said.

Any review of priorities is sure to be contentious, though.

The cancer society's report is the first major effort to look at the economic cost in terms of global productivity. It was done with Livestrong, cancer survivor and cyclist Lance Armstrong's foundation. Authors plan to publish it in a scientific journal and to present it Thursday at the biannual meeting of the World Cancer Congress in Shenzen, China.

Researchers used the World Health Organization's death and disability reports, and economic data from the World Bank. They calculated disability-adjusted life years, which reflect the impact a disease has on how long and how productively people live.

"That has become a more and more common way of looking at the global burden of disease," said Wendy Max, a health economist at the University of California, San Francisco, who is familiar with the work and the methods the researchers used.

Lung and related cancers account for $180 billion of the $895 billion total. Smokers die an average of 15 years earlier than nonsmokers, the report says. Heart disease follows cancer, with an economic impact of $753 billion.

Only 5 percent of cancer treatment and prevention money goes to the countries that bear 80 percent of the burden of the disease, said one of the authors, Dr. Julio Frenk, dean of Harvard's School of Public Health.

"We are literally being victims of our own success" — more people are surviving infectious diseases and living long enough to develop cancer, but treatment gaps remain, he said.

Dr. Lawrence Shulman, chief medical officer of the Dana-Farber Cancer Institute in Boston, said cure rates for breast cancer are 80 percent or more in the U.S. and half that in many other countries.

Many treatments are quite affordable "and could be successfully delivered in even the poorest settings," he said. Organizer Stina Brown did an awesome job of putting a great evening together. Stina is our Polk County Relay For Life Community representative. She is passionate about the American Cancer Society, and is great to work with. The Celebrity Waiter Dinner consisted of Celebrities of the Texarkana area each having their own table which they decorated and then during the dinner served as the waiter. Our waitress was Junior Miss Arkansas. Besides paying to attend, each person was to tip their waiter as a donation to the ACS. There was a competition to see which waiter could raise the most money in tips. Over 7,000 dollars in tips was raised. During the evening, My wife Gina was recognized for receiving the ACS Voluntarism Leadership Award for her work with the Polk County Relay For Life. I was proud to see her hard work appreciated. The entertainment for the evening was an Elvis impersonator from Memphis. He did a great job and was very energetic. He sang to Crystal and gave her a lei during the Blue Hawaii set. Elvis performed for almost two hours with several costume changes. Besides being a great entertainer, he was very personable, visiting with everyone after the show and taking photos. The Celebrity Dinner was a very enjoyable evening. On our drive home we discussed how we could make something like it work in Mena. Maybe someday there will be an American Cancer Society Celebrity Waiter Dinner in Mena. Stay tuned! Posted by Richard Lawry at 8:24 AM 0 comments